Assisted by Camion Pro, an advocacy group for the transport industry, German TV journalists have conducted covert investigations in Rumania, and attended road checks in Poland to expose what seems to be a widespread criminal practice of manipulating truck engines. Camion Pro director Andreas Mossyrsch had first investigated such manipulations of the emissions of East European trucks undercover, and published his insights in spring 2016. Now he has made those findings available to TV broadcaster ZDF, and supported the investigation carried out in Rumania by the team working for ZDF programmes Zoom and Frontal 21. More information, including a scientific study and additional footage, will be available soon on our website: www.camionpro.de

Munich, 2017-01-22: extent of truck emissions scandal turns out much larger than suspected

According to a recent study published by Heidelberg University, 23 or possibly even 40 percent of all East European trucks on the road in Germany have had their control systems modified by installing so-called AdBlue emulators. In other words: the number of manipulated trucks is almost twice as high as previously assumed.
An AdBlue killer (AdBlue emulator) is an electronic component designed to manipulate the control system of a modern truck engine to the effect that the engine remains fully functional even without injecting diesel exhaust fluid (DEF), better known by the AdBlue trademark. Manipulating the engine that way greatly increases its toxic nitrogen oxide (NOx) emissions. Camion Pro, a truckers’ association based in Germany, has worked for months with a team of TV journalists from public-service broadcaster ZDF to investigate the scale and background of those manipulations. ZDF has reported extensively on the issue in its heute newscast, in its Frontal 21 programme aired on 17th January 2017, and in ZDFzoom on 18th January.
When the story was aired, the scientific study conducted by Dr. Denis Pöhler from the Institute of Environmental Physics at Heidelberg University had not yet been published. Compared with the final version out now, the estimates given in ZDFzoom’s documentary, titled Die Lüge vom sauberen Lkw (“The Lie About Clean Trucks”), appear far too low. Andreas Mossyrsch, director of Camion Pro: “Environmental pollution from manipulated trucks is probably twice as high as we thought. In fact, the damage is possibly even greater than the ecological effects of the Volkswagen scandal.”
Camion Pro and ZDF had commissioned the study to identify potential large-scale manipulation and resultant environmental damage. Camion Pro will provide free copies of the study report to researchers and media organizations under certain conditions. The report is available in English, too.

•    “Die Spur des Geldes” (The Money Trail), documentary film on Camion Pro’s investigation in Germany and Bucharest, English version: https://youtu.be/n0bPF61AKJw
•    Six-minute clip in German on how Camion Pro investigated the AdBlue scandal
•    Footage shot with hidden cameras in Bucharest, telephone call with emulator vendor (voiced over and pixelized), recent emissions measurement from Heidelberg University (in English), and single frames of truck stops are all available from Camion Pro
•    Die Lüge vom sauberen Lkw (“The Lie About Clean Trucks”): https://www.youtube.com/watch?v=SfE2AwoPJhM
•    Report (in German) on Camion Pro website: as early as February 2016, Camion Pro shared its suspicion of substantial manipulation of truck engine emissions with the media and the Federal Ministry of Transport (BMVI): https://www.camionpro.de/blog/abgasskandal-2-0 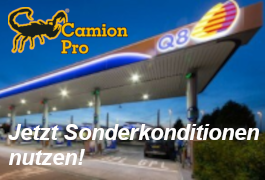